Tap to Call Tap to Email

Divided into seven major construction sections, the $800 million Southern Beltway project will require more than 28 million cubic yards of excavation. By the time that excavation is completed in the fall 2021, the majority of that material will have been moved by one model of excavator: the Cat® 6015B Hydraulic Shovel.

Three of the construction firms selected to participate in the Southern Beltway project work closely with Cleveland Brothers and utilize their sales, rental, parts and service departments. Some of the equipment utilized is the new Cat 6015B excavator to handle excavation duties and articulated trucks to transport materials. A total of four 6015Bs have worked on the project. Cleveland Brothers is proud to support its customers working on this significant project, including the Pittsburgh branch of Ohio-based Independence Excavating, Trumbull Corporation of Pittsburgh and the Pennsylvania division of Chicago-based Walsh Construction.

“Purchasing a piece of construction equipment is not always an easy decision,” said Tom Schachner, Cleveland Brothers Vice President of Sales. “There are a lot of factors that play into the investment: productivity, price, mobility, efficiency and safety, just to name a few. But I believe choosing the 6015B for bulk excavation projects is an easy decision. It checks all the boxes and is simply the lowest cost per ton shovel available in its size class.”

Independence Excavating was responsible for two sections of the project—one at each end of the 13-mile highway. The first section is 100 percent complete, while the second is nearing 75 percent completion. “Between the two sections, we will have moved about seven million cubic yards and will have worked on about four miles of the new turnpike,” said Justin Fox, Vice President of Independence Excavating. In addition, the company’s role included three miles of on/off ramps, two and a half miles of state and township roads, plus two cul-de-sacs. 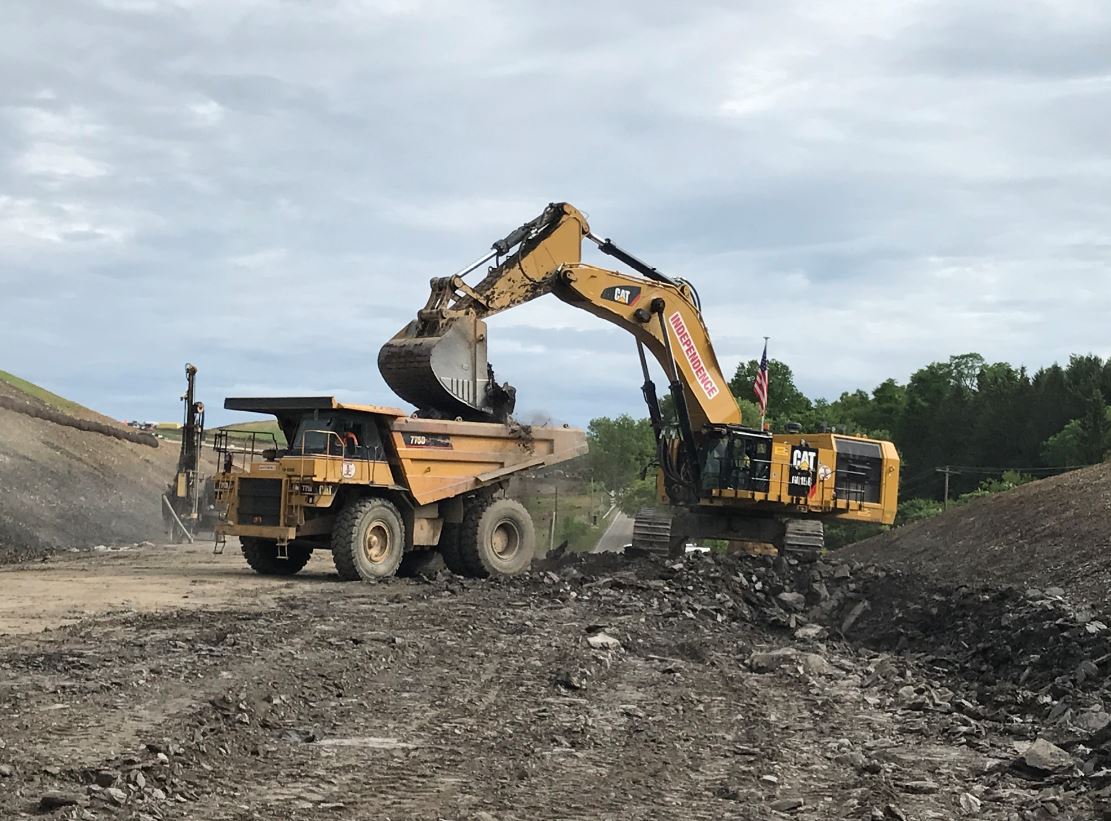 Trumbull Corporation also won two sections of the project. One section is completed and the other is nearing the halfway point. The first section was basically main line earthwork and construction of a small bridge, while the other is a full interchange with three large bridges. Between both sections, Trumbull will have excavated about six million cubic yards, close to five miles in length. “Both sections have gone very well,” said Rich Doyle, Trumbull General Manager. “The owner of the turnpike is very happy with what we did out there.”

Finally, Walsh Construction has begun the project’s finishing piece—a complicated project that will include the new toll road’s $174 million interchange with Interstate 79. The project involves digging pathways under the interstate for the new highway, installing bridges over the new valley, and installing seven interchange ramps. “By the time we’ve completed our section at the end of 2021, we’ll have moved 6.6 million cubic yards of earth,” said Tom Beckowitz, Regional Operation Manager of Walsh’s Pennsylvania Transportation Group.

All three companies rely heavily on Cat equipment and Cleveland Brothers to support their projects—whether that’s building a road, demolishing a structure or constructing a building.
“Pretty much our entire fleet is Cat yellow,” said Trumbull’s Doyle. “We have 777 trucks and almost every size dozer. When it comes to excavators, we have everything from the 308 mini excavator to the 6015, and multiples of each.” The same goes for Independence Excavating and Walsh. “The majority of our equipment is Cat,” said Fox of Independence Excavating. “We have excavators from the 6015 down to 320s and everything in between. We have bulldozers from the D11 down to the D3, loaders from the 988 down to 930s and Cat 16 motor graders.” From graders and excavators to dozers and skid steer loaders, each company’s equipment fleet is stocked with Cat equipment.

“It matches up well with our 100 ton Cat 777 trucks and, because they are both larger, we found it was the most efficient way to move the material,” said Doyle of Trumball Corporation. “We had to bid the job,” he said. “The bigger the equipment we can use, the faster we can move the dirt and be more competitive.” Given its massive size, the 6015B crosses the line between a construction machine and a mining machine. It has an operating weight of 140 tons and a bucket payload of 16 tons—a full one-pass advantage over other shovels in its class. Its Cat C27 engine is the most powerful in its class, delivering engine output of 813 horsepower for faster cycle times and larger payload capacity. It also delivers at least a 20 percent fuel efficiency advantage over similar shovels to reduce overall operating costs, making it the perfect equipment for the Southern Beltway Project. “We believe, and many of our customers agree, that the 6015B can provide a competitive advantage when bidding large excavation projects such as the Southern Beltway,” said Andy Gaslevich, Cleveland Brothers Account Manager.

While Trumbull has had a 6015B in its lineup since 2015, Independence Excavating and Walsh Construction purchased the 6015B specifically for this project. “We did not have it when we bid the job,” said Fox of Independence Excavating. “When we got the job, we knew we needed to add a mass excavator to our fleet and that’s when we went down the road of hard research. We wanted to make the best-informed decision we could make.” Fox said Independence spent a lot of time researching machines and found that the 6015B checked all of the company’s boxes. “We did a test drive on one. Our operator liked the machine, the cost analysis was favorable, Cat has an outstanding support network, outstanding parts and service representation and we love our dealer, Cleveland Brothers. Add all that up, and it was an easy choice,” he said.

Not only was the 6015B the obvious choice for this project and Independence, but it was an easy decision for Walsh and Beckowitz, too. “It’s the best equipment on the market, especially when you add the parts availability, the service and our relationship with Cleveland Brothers,” said Beckowitz. Walsh also found the 6015 to be the most economical choice. “Cost-wise, the 6015B made the most sense,” Beckowitz said. “Then you add in the fuel efficiency, which was very surprising. Running a double shift like we do, and producing the way it does, it’s a very cost-effective shovel.”

Trumbull did its homework before buying its first 6015B four years ago and can’t help but agree with the first two companies. Trumball purchased the shovel as a prototype and Caterpillar did a field follow study on the machine while Trumbull moved 8 million cubic yards of dirt for a Shell
Chemicals project. “We were so happy with it that when we picked up another large project, we bought another 6015B,” said Doyle.

Proven Performance
Given the large scale of the Southern Beltway project, it didn’t take long for the contractors to determine that they had chosen the right machine for the job. Fox of Independence stated, “When we made the purchase decision, we were confident that we made the right choice. And then when we put it in the field, it really supported our decision,” he said. “It’s well built, it’s heavy and it’s smooth. It’s strong and fuel efficient. The ground engaging tools are well built and the undercarriage performs as expected.”

Trumbull saw similar performance. “It’s fast,” Doyle said. “There’s not much downtime. They have performed very well. It’s very balanced and easy to get to for service.” Walsh has been impressed with its speed, as well. “It loads our 777 trucks in about two minutes per cycle,” said Beckowitz. “The power is sufficient and it sizes up with our trucks very well.” 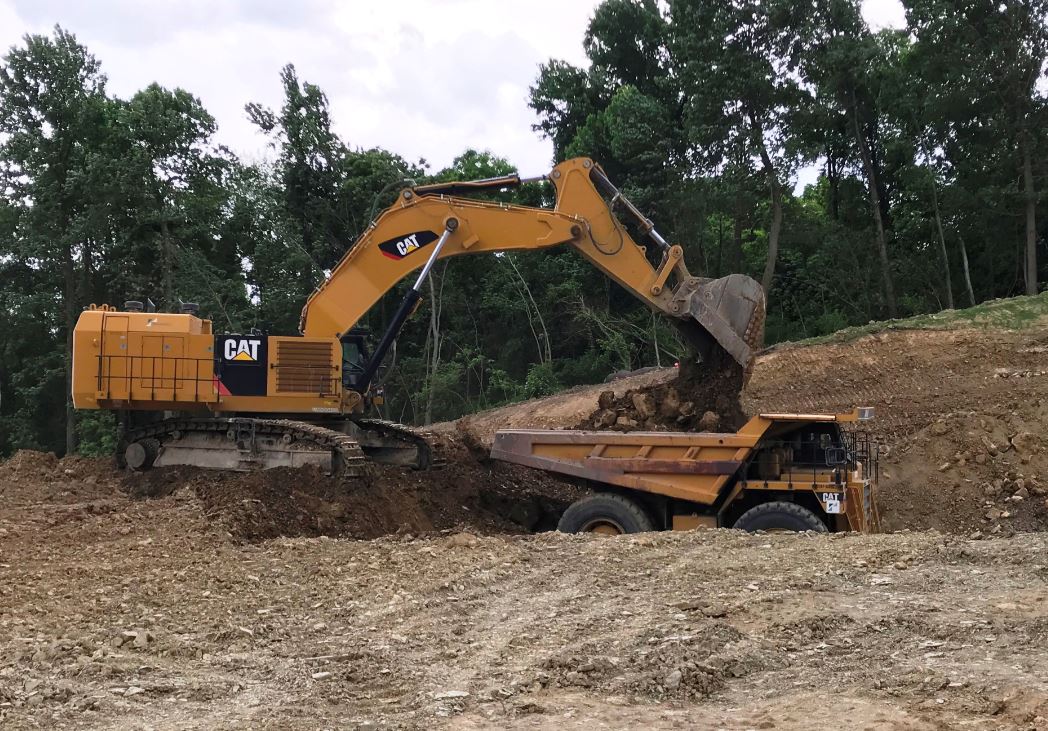 The size and mobility of the 6015B serves as a key benefit for construction companies, and Account Manger Gaslevich attests to this. “Caterpillar has taken a proven platform and successfully re-engineered it from the ground up to increase productivity and lower costs, all while keeping machine mobility in mind for contractors who need to regularly move the

machine from site to site,”

said Gaslevich. Doyle agrees and says Trumbull finds the size ideal. “We like the size because it’s big enough to load large trucks, but it’s easy enough to move around versus some of the other bigger machines on the market,” Doyle said. “We’re a highway and site contractor, not a mining company, so we tend to do jobs a million to two million yards at a time. We move the machine once or twice a year. It doesn’t stay put.” Fox also agreed. “In the space we compete in, it’s the right machine for what we do,” he said. “I personally love moving dirt and if I could, I’d want to operate a (327-ton) Cat 6030, but that’s not realistic. The 6015B was a sensible choice for our overall business and work program.”

Equipment operators at all three companies have expressed their satisfaction with the machine in numerous ways, finding it user-friendly, easy to learn and highly productive. “Operators like it,” said Fox of Independence. “It’s balanced, strong and has good visibility. And the creature comforts in the cab are nice.” Serviceability is also a plus. “Whoever designed it spent some time figuring out how to make it easy to service,” noted Fox. “You can easily get to all access panels. And it’s safe. There are plenty of catwalks, plenty of railings and it’s easy to get around. There was a lot of thought put into maintenance and it goes a long way.”

While the 6015B has proven to be a solid performer and excellent choice for their work on the Southern Beltway project, Trumbull, Walsh and Independence are quick to call out their relationship with Cleveland Brothers as an important contributor to their success. “You couldn’t ask for a better partner in the construction business,” Doyle of Trumball said. “Our equipment is our bread and butter and the support we get and the service we get are top notch. If we have a question or an issue, they jump right on it. They’re very good.” Walsh mentions Cleveland Brothers is always just a phone call away. “We can pick up the phone anytime and call 24 hours a day and someone is going to answer and someone is going to respond,” Beckowitz said. “Whatever they need to do, they do it.”

Fox of Independence describes a similar relationship. “We love the support service we get from Cleveland Brothers. Our own mechanics and heavy equipment shop love interfacing with their employees. They’re always there to help if we need a mechanic on site, or helping us research a difficult-to-find part. When we make an investment decision like buying a 6015B, it’s a long-term purchase. We’re very comfortable knowing Cleveland Brothers is behind us.”
Fox continued, “I just think the success of the 6015B speaks to Cat, their dealer network and then our dealer Cleveland Brothers. They’re just excellent from top to bottom.”

This article was originally created and produced by Caterpillar.

« Plum Contracting, Inc. Executive Shares Their Small Business Story at the White House
Gear Up and Get Moving: Act Now on Our Limited Time Offers! »